Brexit: Your simple guide to the UK leaving the EU

Brexit is short for "British exit" - and is the word people use to talk about the United Kingdom's decision to leave the EU (European Union).

What is the EU?

The EU is a political and economic union of 28 countries which trade with each other and allow citizens to move easily between the countries to live and work (click here if you want to see the full list).

The UK joined the EU, then known as the EEC (European Economic Community), in 1973.

Why is the UK leaving?

A public vote - called a referendum - was held on Thursday 23 June 2016 when voters were asked just one question - whether the UK should leave or remain in the European Union.

What has happened so far?

The 2016 vote was just the start. Since then, negotiations have been taking place between the UK and the other EU countries.

The discussions have been mainly over the "divorce" deal, which sets out exactly how the UK leaves - not what will happen afterwards.

This deal is known as the withdrawal agreement.

What does the withdrawal agreement say?

The withdrawal agreement covers some of these key points:

to watch the video: https://www.youtube.com/watch?v=jCTlrTOYF0Y

A length of time, called the transition period, has been agreed to allow the UK and EU to agree a trade deal and to give businesses the time to adjust.

That means that if the withdrawal agreement gets the green light, there will be no huge changes between 29 March 2019 and 31 December 2020

Another, much shorter, document has also been drawn up that gives an overview of what the UK and EU's future relationship will be in the longer term.

This is the political declaration. However, neither side has to stick exactly to what it says - it is a set of ambitions for the future talks.

The deal was agreed by the UK and the EU in November 2018, but it also has to be agreed by British MPs - and they have so far voted against it.

How did MPs vote on the withdrawal agreement?

They voted overwhelmingly to reject the deal on 15 January by 432 votes to 202 - a huge defeat.

Prime Minister Theresa May is talking to the EU in an attempt to get some changes to her Brexit deal.

This comes after MPs put forward some suggestions to try to change the direction of Brexit.

It means Mrs May is now focused on sorting out a row over Irish border arrangements.

The problem? The EU says it has already negotiated a deal.

Mrs May has said MPs will be able to have a second vote on a Brexit deal by 12 March.

If MPs reject her deal again, they will be asked to vote on whether they would like to leave the EU without a deal instead (they are expected to say no to this).

If they do say no, Mrs May will ask MPs to vote on whether the leaving date of the 29 March should be pushed back.

Mrs May has said the latest it would go to is the end of June and that would "almost certainly" be a one-off.

Why do people oppose the deal?

There are a broad range of complaints, many of which claim the deal fails to give back to the UK control of its own affairs from the EU.

One of the biggest sticking points has been over what happens at the Irish border.

Both the EU and UK want to avoid the return of guard posts and checks, so something called the backstop - a sort of safety net - was included in the deal.

What is the backstop?

The backstop is meant to be a last resort to keep an open border on the island of Ireland - whatever happens in the Brexit negotiations.

It would mean that Northern Ireland, but not the rest of the UK, would still follow some EU rules on things such as food products.

The prime minister insists that if all goes as planned it will never be used.

But it has annoyed some MPs, who are angry that the UK would not be able to end it without the EU's permission and so EU rules could remain in place for good.

Other MPs would prefer to stay closer to the EU - or even still in it.

And others say Northern Ireland should not be treated separately from the rest of the UK.

It is written into law that the UK will be leaving on that date at 11pm UK time.

But it is impossible to say with any certainty what will happen next.

The deadline of 29 March could definitely be extended, though.

As explained earlier, MPs could be given the choice to vote on whether to delay this date if they vote neither to accept Mrs May's deal nor to exit without a deal.

But what happens if they do vote for a delay is not yet clear.

Mrs May said it wouldn't make getting a deal "any easier" - and that the choices would still be "leave with a deal, leave with no deal, or have no Brexit".

Meanwhile, the European Court of Justice has said the UK could even cancel Brexit altogether without the agreement of other nations.

Mrs May, however, says she "shall not" do that.

What happens if the UK leaves without a deal?

"No deal" means the UK would have failed to agree a withdrawal agreement.

That would mean there would be no transition period after 29 March 2019, and EU laws would stop applying to the UK immediately.

The government says it is preparing for this potential situation, but there is "little evidence" that businesses are.

It expects some food prices could rise and checks at customs could cost businesses billions of pounds.

It has published a series of guides - which cover everything from pet passports to the impact on electricity supplies.

A senior figure at Honda listed a catalogue of risks posed by Brexit at a briefing near its Swindon plant last year, fuelling doubts about the carmaker’s insistence that Britain’s withdrawal from the EU had nothing to do with the factory’s closure.

The Japanese carmaker, which said earlier this week that the closure was “not a Brexit-related issue”, appeared to dilute its rhetoric after the Guardian presented it with details of what Swindon residents were told last year.

During a meeting on 14 September – five months before the firm said the plant would close from 2021 threatening 7,000 jobs, including 3,500 directly employed at the plant – Honda Motor Europe’s government affairs manager, Patrick Keating, told locals the company was committed to the site.

The Guardian view on Honda’s closure: of course it’s partly about Brexit

But, according to notes taken by local Labour councillor Jane Milner-Barry, he also flagged up a litany of reasons why Brexit, in particular the prospect of a no-deal scenario, posed a threat to the factory.

Keating predicted that Brexit could interrupt crucial “just in time” delivery of 2m parts a day, 20% of which come from Europe and which allow smooth operation of the company’s supply chain.

Brexit also raised the prospect of increased customs controls and paperwork, he said, warning that suppliers might have to fill out 60,000 customs declaration forms a year. He also pointed out that 20% of staff at Swindon were EU nationals and expressed concern about regulatory divergence that could force the company to carry out two differing sets of tests on vehicles.

Keating said Honda’s requirements included tariff-free barriers, access to the EU’s free-trade agreements with other countries, access to talent and the ability to move staff from one country to another, a clear plan on regulations and a predictable Brexit process with a meaningful transition period.

Honda repeatedly dismissed Brexit as a factor this week, saying its decision was “not influenced by Britain’s plans to leave the EU”, a claim cited by the prime minister on Wednesday.

But in a fresh statement it softened its tone, saying that “no one single event” was to blame. “Honda is on record as stating that its preferred scenario following Brexit is one that delivers frictionless trade, access to talent and regulatory alignment,” the company said. 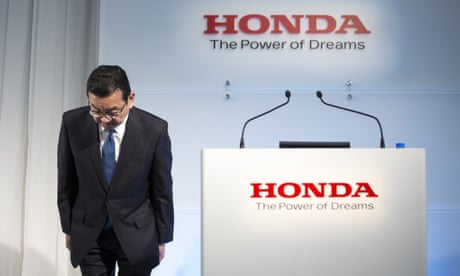 “It is true that a ‘no-deal’ scenario would cause a number of challenges for our operations. However, no one single event has led to the proposal to cease production at Swindon. The decision is in response to unprecedented change in the global automotive industry and the need to deploy electrification technologies across our business.”

Multiple factors are understood to be behind the closure, including global market conditions, the shift to electric vehicles and a free-trade agreement with the EU that will allow Japanese carmakers to export cars tariff-free from 2027.